If you want to crash a party, get revenge, or just have some fun, Stink Bombs would be the thing to do it with! Our stink bombs will clear out a whole room in seconds. Just break them on the ground and watch everyone's reaction! Stink bombs are excellent flea market items and definately a classic item that will never fade away. Our stink bombs come 3 in a box.

These are the worst smelling stink bombs on the market! Just imagine the smell of sulfur, rotten eggs, and farts all mixed up into one nasty aroma.

How to Use the Stink Bombs

Simply take glass vial Stink Bombs out of the package, throw on the ground, or step on them. In just a few seconds the room and entire area will be looking to see who cut the cheese!

We also have Liquid Ass. Yes, this extremely potent fart spray has been seen on the Howard Stern show. This stuff does not have the sulpher stink, it actually smells like SH**. Spray someone with Liquid Ass and they will smell like SH** for the rest of the day....not kidding, this stuff is the best you can buy!

100% Secure Ordering
You'll never have to worry about your credit card information if you order from our stink bomb site.
Every time you complete an order form, your data is encrypted in a secure manner.
Security measures are in place to protect the loss, misuse and alteration of the
information you submit to our site. 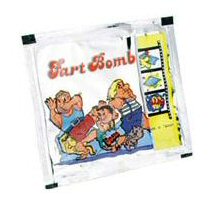 Fart Bomb Bag - set of 3
Whether your goal is to clear out a whole room or play a practical joke on your friends or family, these fart bombs are sure to gross out your intended victims. Just break them open and watch it POP!

One cup of ammonia

One box of matches

Glass jar with a lid

Cut the matchheads off the matches and put into the jar. Add ammonia. Let sit for one week or longer. When you�re ready to use it, shake it up, take off the lid and leave it for the unsuspecting. Works best if you set it where it will likely get knocked over and spilled, like in a doorway.

This is potent from the moment it hits air and lasts a while. Good to spill on carpets/cloth walls, though beware that it will leave a bright red spot. It is easily concealed in cranberry juice bottles.

Check out our other gag joke items